Last Friday we left our homesit at Geraldine and headed off towards the West Coast. First stop was at the A & P Showgrounds at Oamaru where we parked up for the night. In the morning we decided to head to Ranfurly where we stayed two nights at the NZMCA Park. While here we went over to Naseby for the afternoon. A quaint town established during the goldrush. Ranfurly took over when the railway came to town. There was a regular passenger service that went through Alexandra and into the country. Ranfurly was the midpoint and a stopover where food and beverages could be purchased at local shops and the hotel.

While in Naseby we visited the local hotel for a glass of cider and a look at the memorabilia on the walls. There was a shield in memory of the local policeman, Peter Umbers, who was bludgeoned to death during his investigation of a robbery. The shield holds a policeman’s batton and a small rocket launcher remembering his army background. Every year the police have a curling competition with the locals at the all year curling stadium. Further memorabilia were on display including a display case full of Scotch Whisky.

In memory of policeman Peter Umbers.

From Ranfurly on to the freedom camping area at Lowburn just north of Cromwell and the next day over to the West Coast via the Haast Pass. Up along the shores of Lake Hawea and Lake Wanaka and into the Pass. A lovely scenic trip through bush lined hills. We stopped a couple of times to look at Lake Hawea and the Fantail Falls.

Parked at the Lowburn freedom camping area. Note our new awning covering our bed area. Very happy with it. Keeps the light out and keeps the heat in.

A view out over Lake Hawea.

Arrived at Haast where we visited the information centre. Had a coffee and then on to Jackson Bay where we stopped for a couple of nights. Very peaceful with the fishing boats coming into the wharf to unload and stock up before heading back into the Tasman Sea. While here we tramped a few short tracks through the bush. The rainfall on the west Coast is obvious with the trees covered in lichens, ferns and moss. The tracks are well maintained.

Jackson Bay. Our van is  parked over to the right. Hard to believe but 400 people were sent here to start a new town, Arawata. A wharf was to be built, roading and houses, farms etc but it all fell through. There was no wharf  the people fell ill with the damp weather etc and within a few years most people left. There are a number in the cemetary down the road.

The weather has not been great with rain setting in on Wednesday. We travelled from Jackson Bay to Lake Paringa, a DOC Camp. In the parking area there is a sign warning that the lake levels can come up through the parking area in periods of rain. We made sure we were uphill from the warning sign but during the night with the  rain thundering down on the caravan roof my little fertile mind could hear torrents of water rushing over the gravel beneath our van and the Lake level rising to wash us away. In the morning however the lake was still within its boundaries and there was no evidence of those torrents washing away the gravel beneath our  van. This would be a very nice place to stay with some sunny days.

Thursday we  packed up in the rain and travelled up to Fox Glacier along the bush lined roads. It rained every inch of the way, sometimes so heavy the wipers were on full bore. About every 100 metres or so there seemed to be a bridge over a rushing stream or river much increased by the heavy rain. A lot of the bridges are one way and those over the larger rivers suspension. 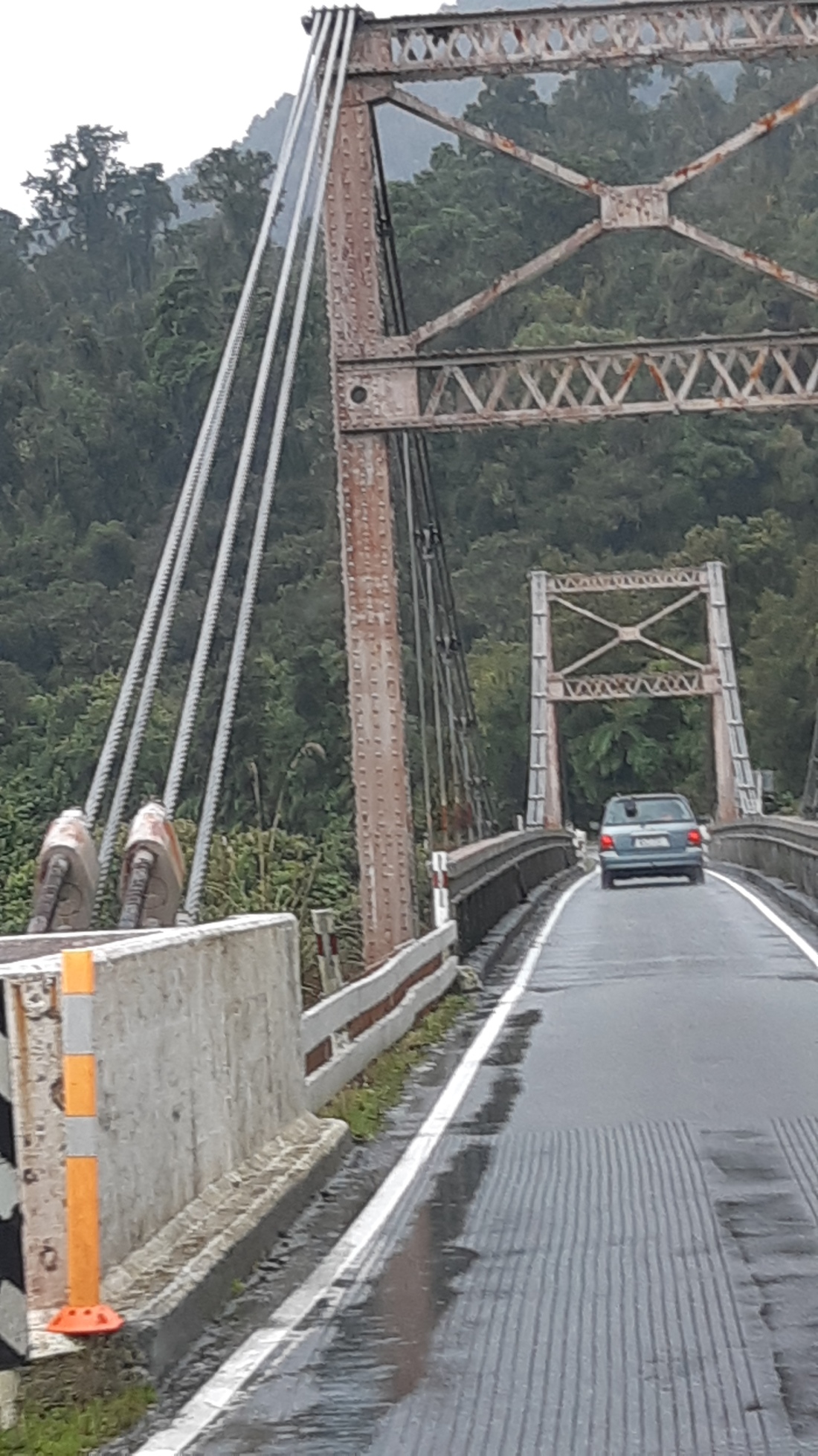 Tonight, Thursday the 9th, we are in the Top 10 camp ground. At last back in weak cell phone coverage, so we have some internet back and we can enjoy a nice shower and mains power. The rain is still falling and some heavy thunder, though its getting better over the next few days with sun on Monday. Well, we ARE in the West Coast. Being May, most of the tourists have gone and some businesses have closed. Our next homesit is not until July so plenty of time to explore.

One thought on “And the Rain Came Thundering Down”