Thursday we left the caravan at the campsite and headed off to Lake Hawea for a look. The lake was dammed up back in the 50s raising the lake level by up to 18 metres. The level is controlled over eight metres with the outflow joining the outflow from Lake Wanaka for power generation at Clyde and Roxborough. Hawea, a quiet town is on the road to the Haast Pass and West Coast. 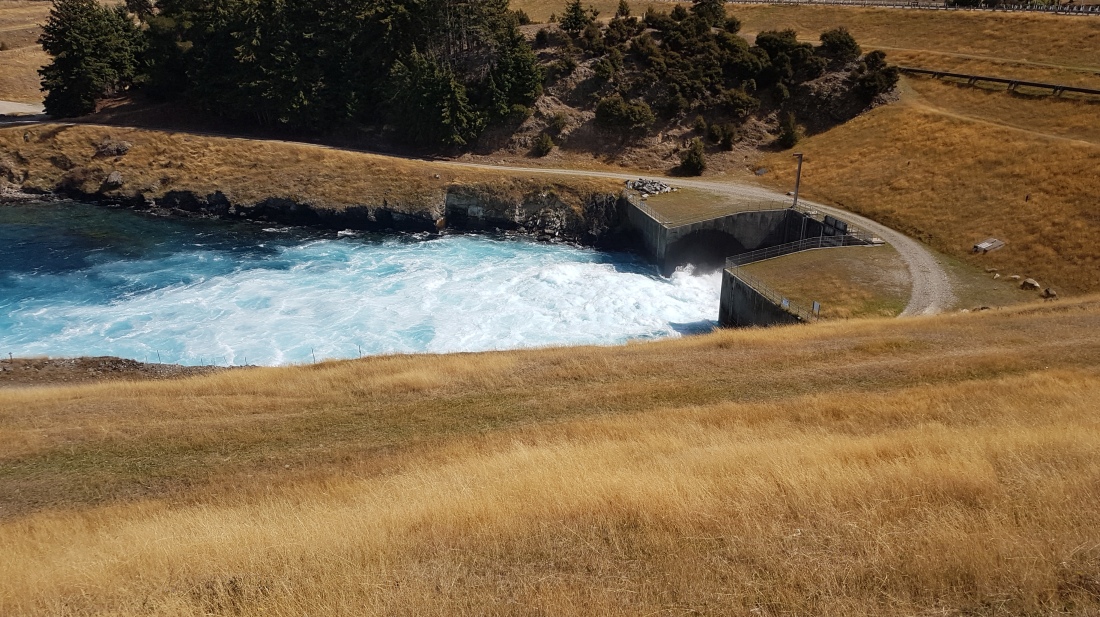 The controlled outlet from Lake Hawea. An awesome sight.

Friday it was off to Omarama through the Lewis Pass, arriving at Omarama just after lunch. Straight round to the airport to book flights on a glider. Omarama is recognised as the premier gliding area in the world and attracts internatioal glider enthusiasts from all over the world. Judy booked into a long flight over the Southern Alps to Mt Cook, and myself a short 1/2 hr local flight. 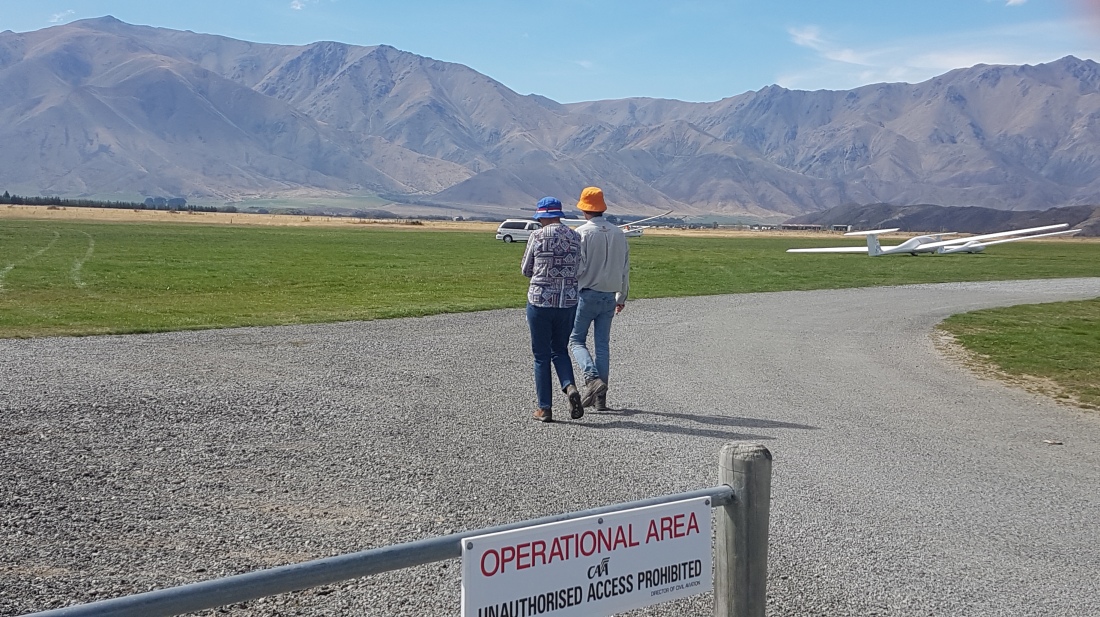 Judy walking out with her pilot, Norbert Scarlat, a young Romanian who was ranked 6th in the 2018 world gliding contest. Definitely a a safe pair of hands. He is here in Omarama tuning his skills for the 2019 contest.

Judy’s flight left first and I had to wait for over an hour before a glider became available for me. Time to work up a  good deal of nervous tension. Those gliders are frail looking skimpy things. My  pilot was Sabrina Schels, a pilot for over 15 years. 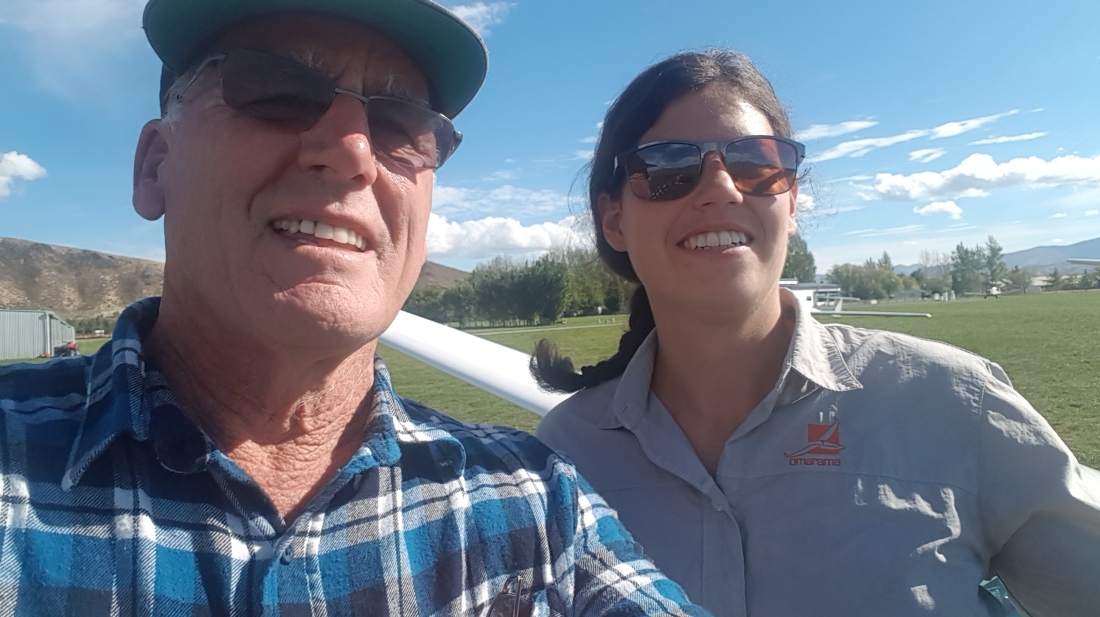 She made sure I was well buckled in, gave me a rundown on the instruments in front  of me and off down the runway we went being towed by a Fatman 200, an agricultural aircraft. We were towed from the runway that was at 1400 feet above sea level up to 5000 feet where we disconnected from the tow plane. From there we swooped over the mountains searching out rising air, the only sound the hiss of air over the fuselage. Sabrina kept us flying at around 58 knots. Very peaceful. 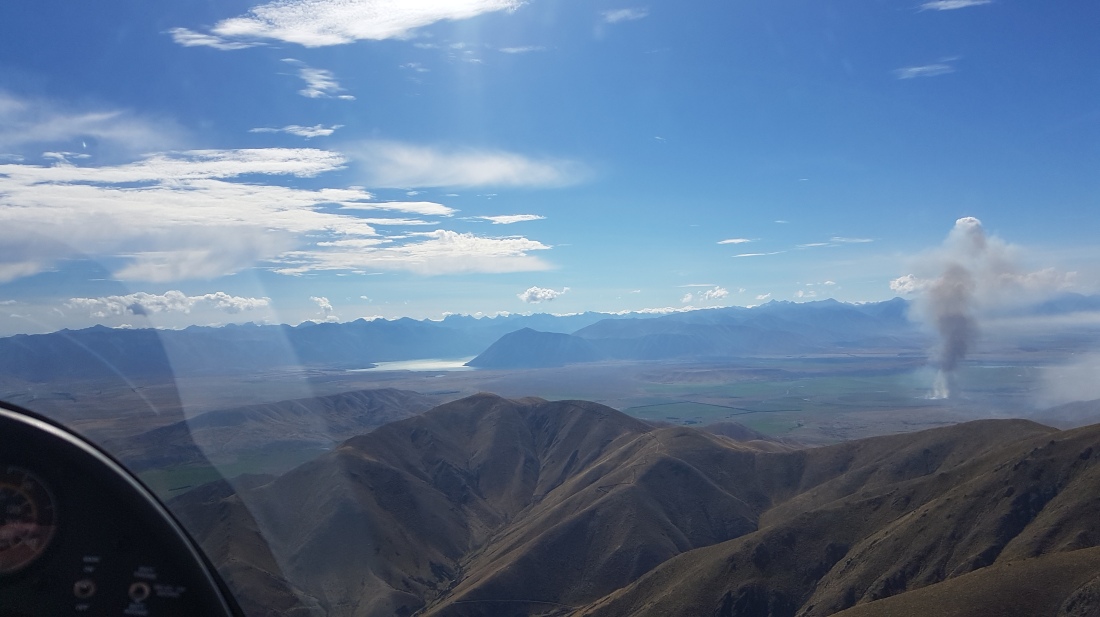 That’s Lake Ohau centre and someone having a big burn up to the right. 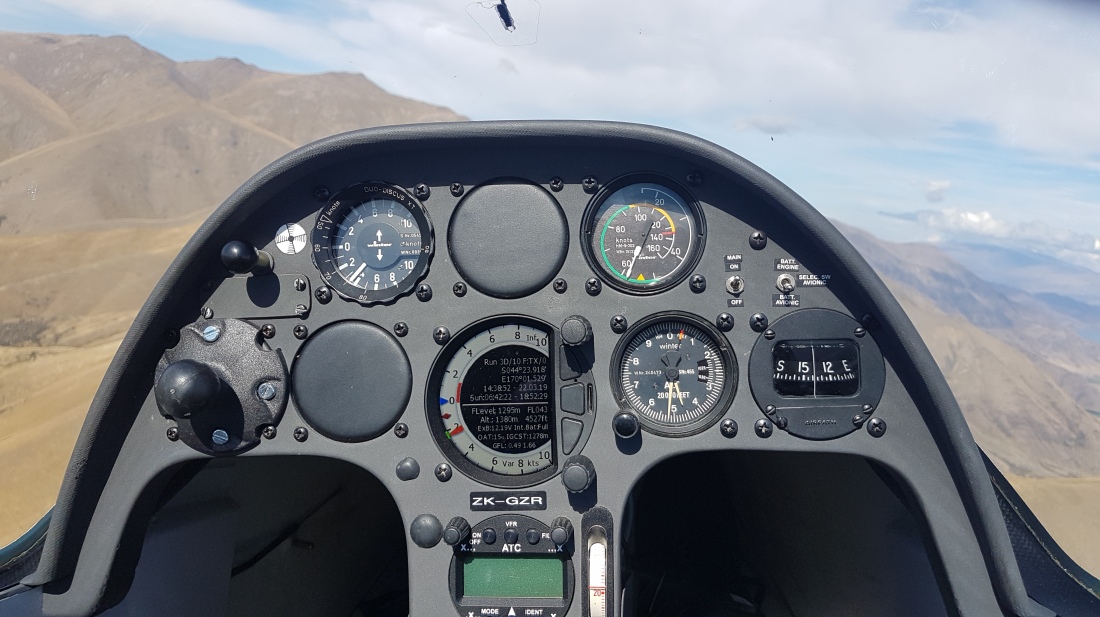 The instrument panel in front of me. The black line at the top is a piece of wool similar to a tell tail on a yacht.

Before long my 1/2 hour flight was over and we came back down to land on the airstrip. As we were coming in, Sabrina put the air brakes on  and I was surprised to see on each wing  boards that rose out of the wings and caught the wind slowing us down. 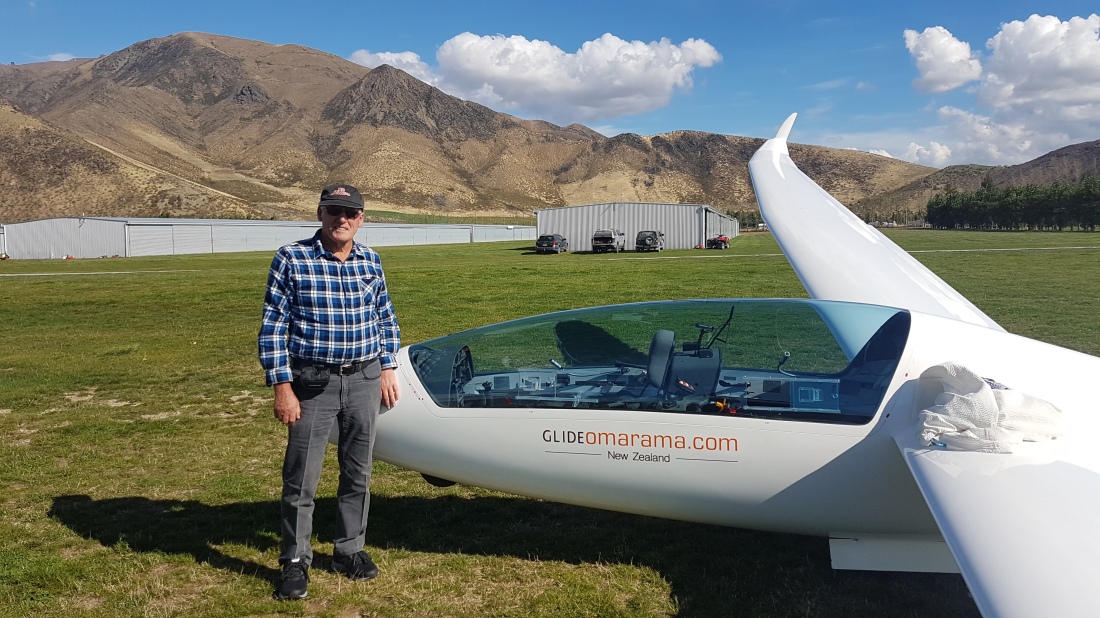 Me in front of the glider after the flight. I sat in the forward seat and Sabrina behind.

After my flight I sat in the lounge waiting for Judy’s return. After some considerable time and  way past her return time I went to find out where she was. Her glider was stuck on the wrong side of a mountain and Norbert was trying to find some lift to return. I was told not to worry. There was an airstrip in the vacinity and they could land there, and they would send the tow plane to get them up again. Norbert finally found the lift needed to rise over 5000 feet to return. Previously they had been to 9400 feet. Meanwhile I had decided to go back to the caravan to have a coffee while I waited, keeping an ear out for a departing tow plane. Judy finally arrived back at the caravan after well over three hours flushed with the affternoons activities.

Judy’s flight over the Southern Alps. Mt Cook is just visible below and slightly to the right of the wing tip.