From Omarama to the Ohau B Canal is a short drive of less than 1/2 an hour. The Ohau B is another hydro electric dam fed from Lake Ohau and Lake Pukaki down the canal. Meridian Energy own the station and the canal that feeds it. They have opened a portion of the canal for the use of NZMCA Members. It is a popular spot particularly because straight opposite is a salmon farm and the canal has salmon running free in it. Several people were fishing on it. The salmon farm has a cafe and small restaurant attached. Judy and I went over for coffee and a meal. Very nice too. Judy had the Salmon Chowder and I had the Hot Smoked Salmon Salad. 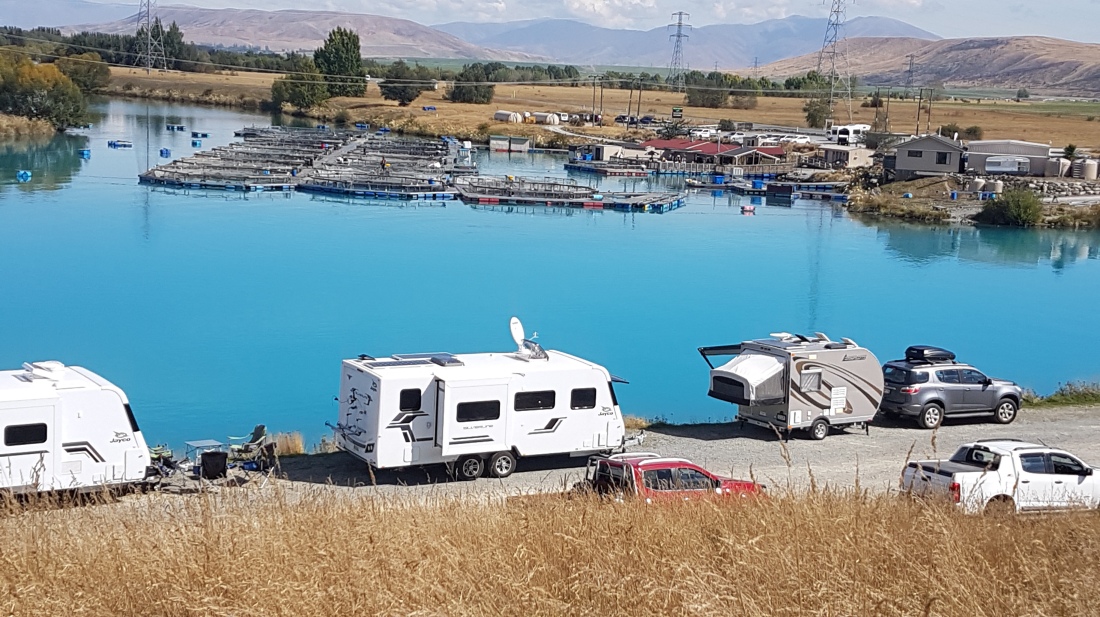 While sitting in the caravan in the afternoon I saw a peculiar looking duck on the other side of the canal. So out with the binoculars for a closer look. Then out with the more powerful scope as my interest quickened. Sure enough it was a juvenile Great Crested Grebe. A bird I’ve been looking for for some time. It was joined by an adult bird that was diving and feeding the juvenile. They breed and live on inland lakes etc up towards inland of Chistchurch. Much excitement, my first sighting.

Sunday we pushed on for the Tasman River Delta that feeds into the Lake Pukaki in search of the Black Stilt. Another bird I’ve spent time on trying to see on other visits to the South Island with no luck. We parked the caravan in the camping ground there and set off onto the delta. Unfortunately we missed the correct turnoff and took the colorado over some very suspect terrain, some fast running streams and along a less travelled track to the middle of the delta. Thank goodness for 4 wheel drive. We finally came to an area that was very boggy and we parked up and went the rest of the way by foot. Some interesting birds seen here were the Black Fronted Terns, but no Black Stilts.

Searching. Binoculars to the eyes.

Still searching. I seem to be getting too tall. I’m growing through my hair.

We progressed further up towards Mount Cook and saw a lady coming off the delta armed with some impressive camera equipment so stopped for a talk. She also had been looking for the stilts with no luck. On the way back to the caravan we saw the correct entrance and went in. The track in was well formed leading down more towards the lake frontage. I saw a bird far over to the right and bought the binoculars on to it. Sure enough it was a Black Stilt with another following along behind. They took to the air with others of the same kind. Flew over the car and landed 20 odd metres away in front of the car. I counted nine of them. I got out of the car and edged nearer. They did not seem worried about my presence but I was wary that I might disturb them.

Black Stilts are endemic to New Zealand and are considered critically endangered. There is a concerted effort to increase numbers. The wild population has been supported entirely by the release of captive-reared birds. Extinct in the wild? I’m not sure of the current situation but I think it is improving.

The Great Crested Grebe is native to New Zealand and considered threatened.

We took a short trip up to the Mount Cook Village to take a photo of Mount Cook.

It would probably be a better idea to chose a nice day to see our tallest mountain.

The weather changed overnight. We woke to rain and a very strong wind blowing down towards the lake from Mt Cook. It was a very windy trip over to the NZMCA Park at Lake Tekapo. We intend staying here for a couple of nights in the world renown dark sky territory. The observatory is just up the road but the weather forecast is for this weather to continue so no sky gazing for us.