Seems a long time ago but it was a fortnight ago when we were in Lawrence. We stayed at a lovely POP (Park over Property) 8890. Great hosts and a peaceful spot with bird song to wake up to. 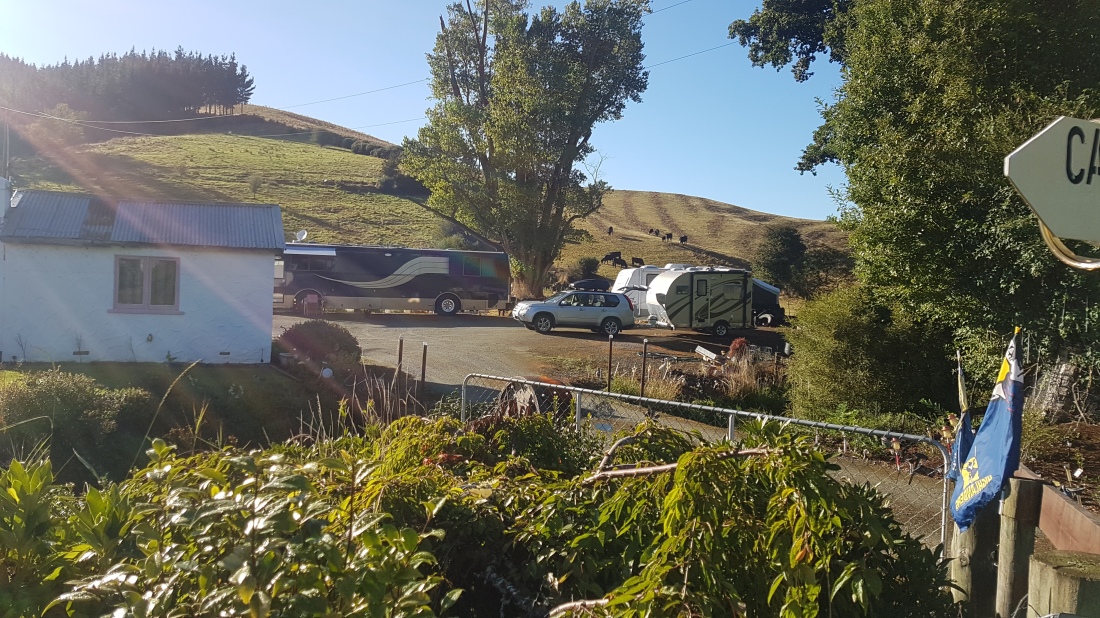 We stayed up late and when I stepped out of the caravan at 2200 hrs it was pitch black with hundreds of fairy lights surrounding us.

Quite a bit to see in Lawrence. The local school teacher John Woods, who played 12 different musical instruments, wrote the music for our National Anthem and the words were written by Dunedin poet, Thomas Bracken. A picture r write up on John is in the main street.

Judy was fascinated by this Bric a Brac shop. If you spent a week in here you still wouldn’t see it all.

A trip to Lawrence is not complete without a visit to Gabriel’s Gully, where gold was discovered. Eleven thousand miners from all over the world arrived in Dunedin and made their way to the gold field. They staked out a 24 x 24 foot claim and dug straight down to bed rock. Most of the gold was found between 1.5 to 1.8 metres depth. The whole area was churned up with great mounds of rocks etc piled up.  A whole  years wages could be dug up in a few weeks. The hillsides surrounding the gully were covered in tents. It must have been a dirty, cold and miserable existence with the constant threat of claim jumpers.

Next stop was Gore where we stayed only a few hours. 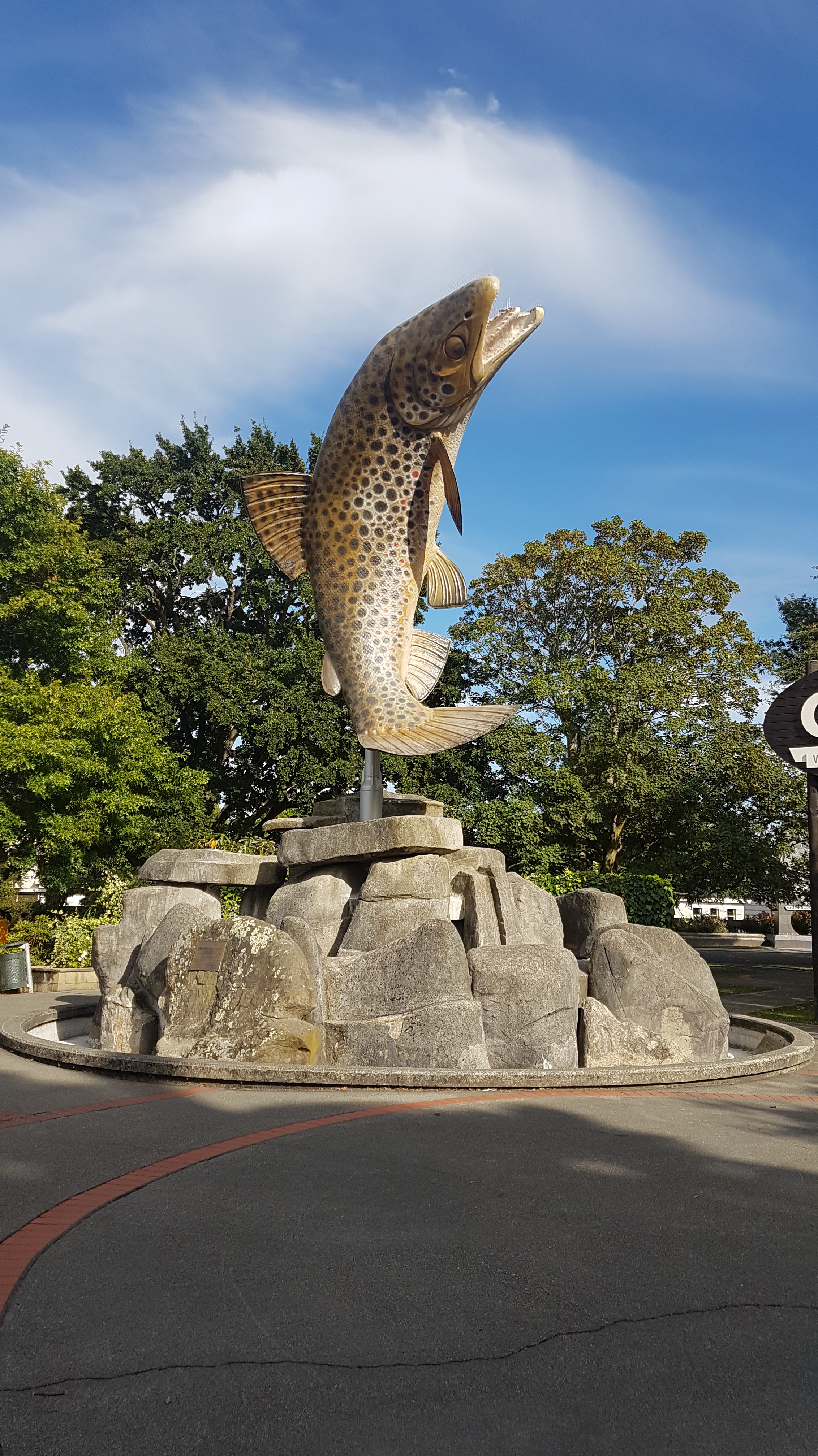 The big trout. Gore is famous for its trout fishing.

Also saw the town clock. The internals are visible  through the glass windows at the bottom of the tower. The clock was originally installed in the Post Office which was in the main street. The tower was destroyed by an earthquake in 1945 and the clock stored until public opinion and fundraising restored it to its former glory in this purpose built tower. 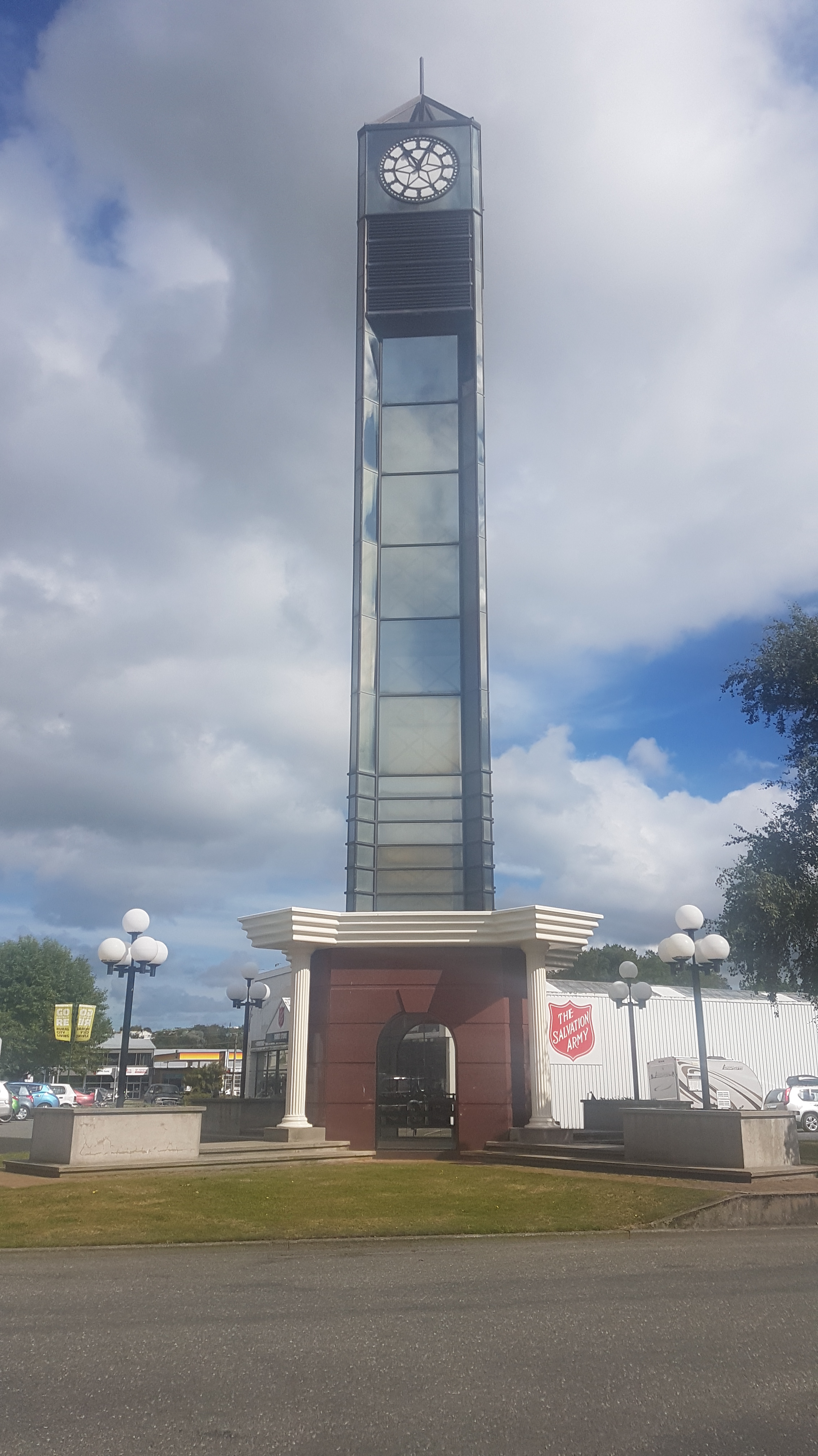 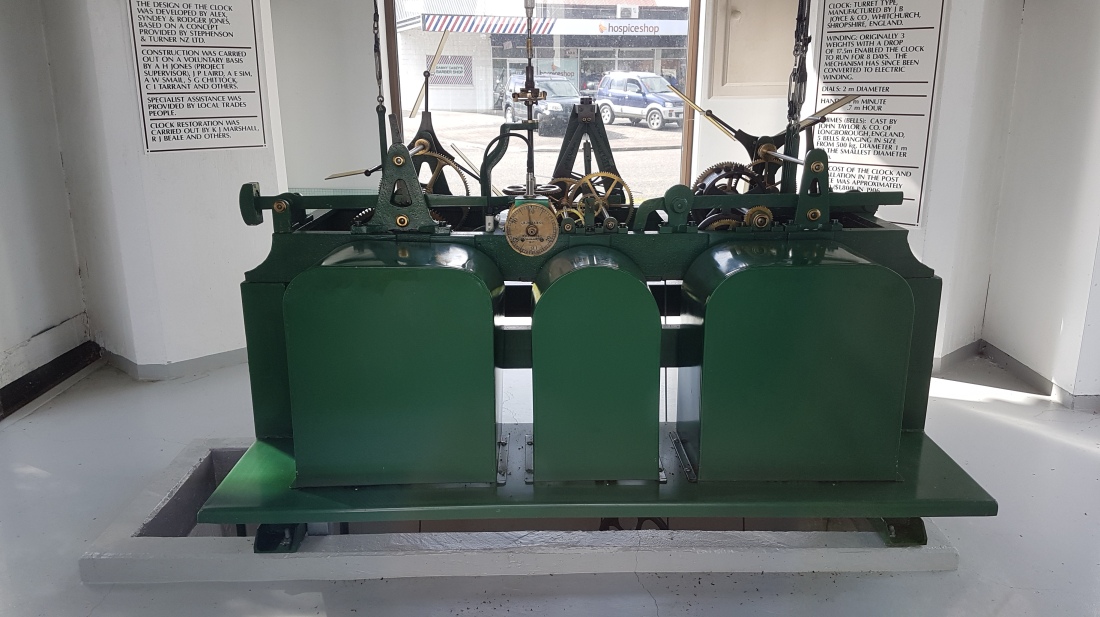 Back view of the mechanism. 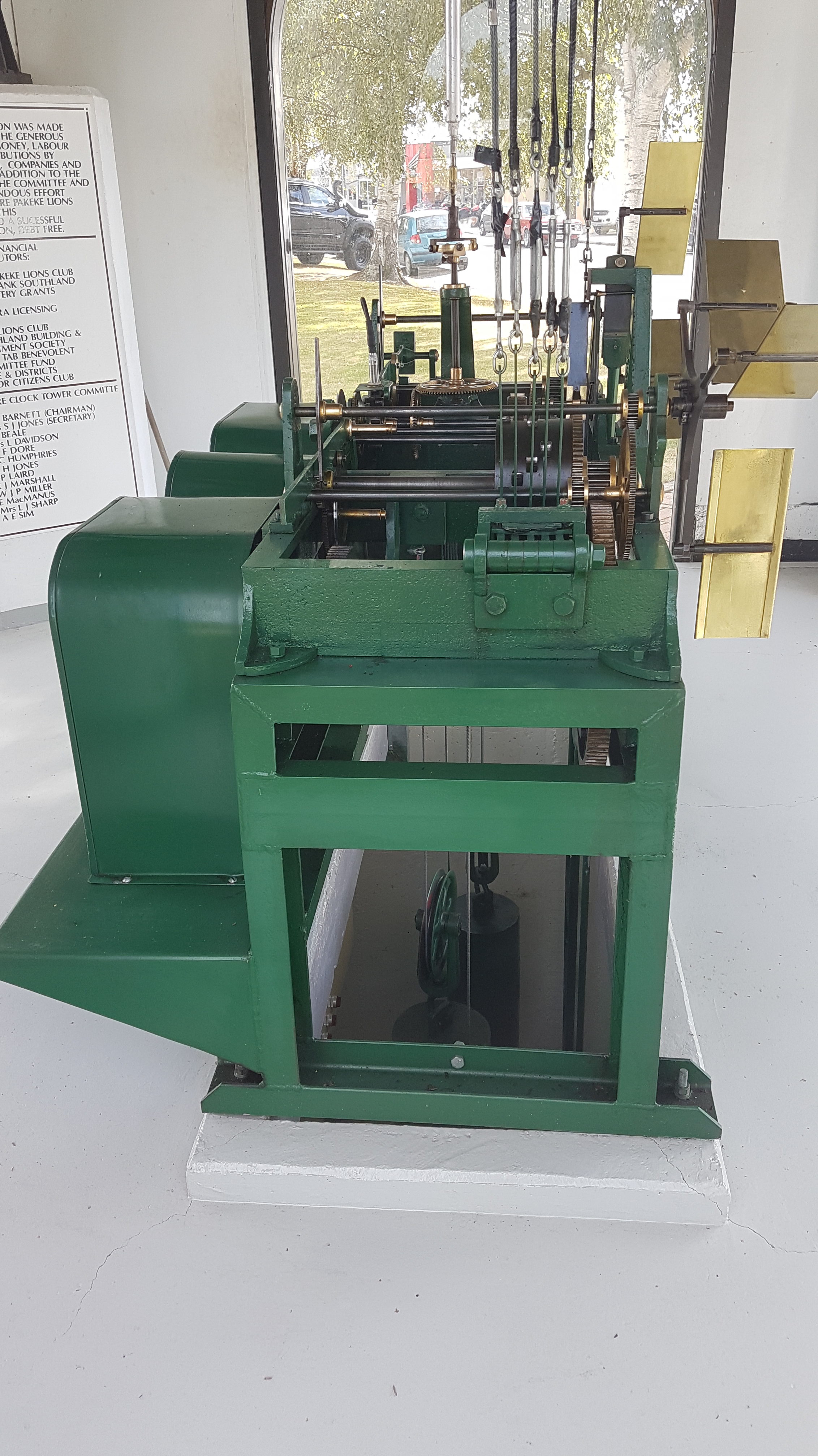 Side view. Note the weights that drive the clock descending into the pit and the pendulum to the right. 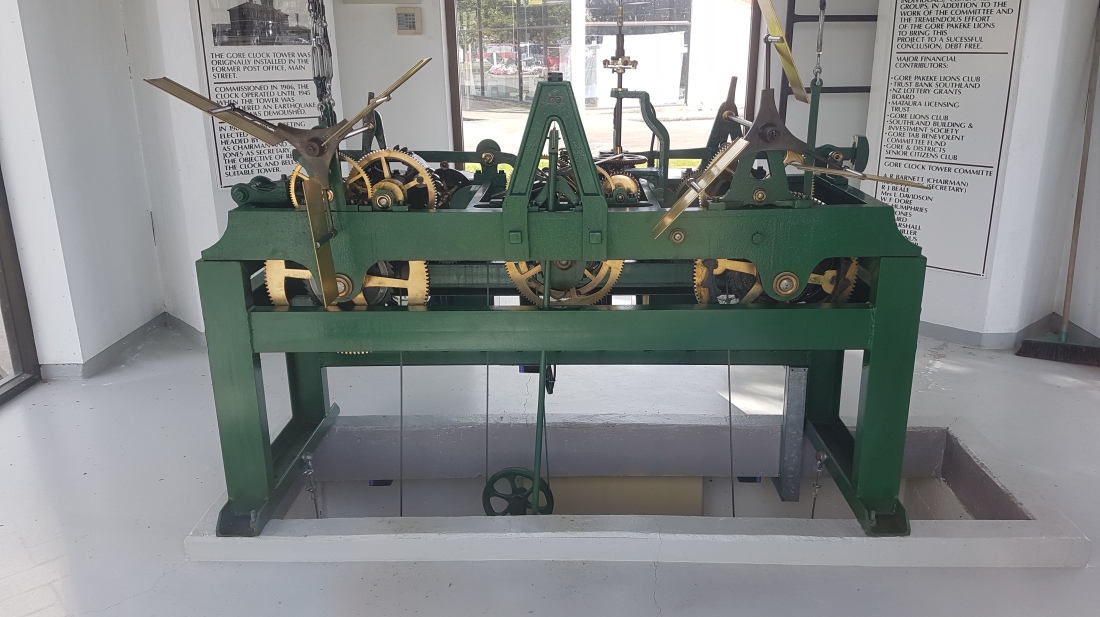 Front view. The wheel to the top left with the damping blades control the chimes through six wires that run to the top of the tower. The wheel on the right controls the bell and the shaft in the centre, the clock itself.

From Gore we headed to Lumsden and the next day, Sunday, to Te Anau. Didn’t make it though. Read about it in the previous post, A New Gearbox. 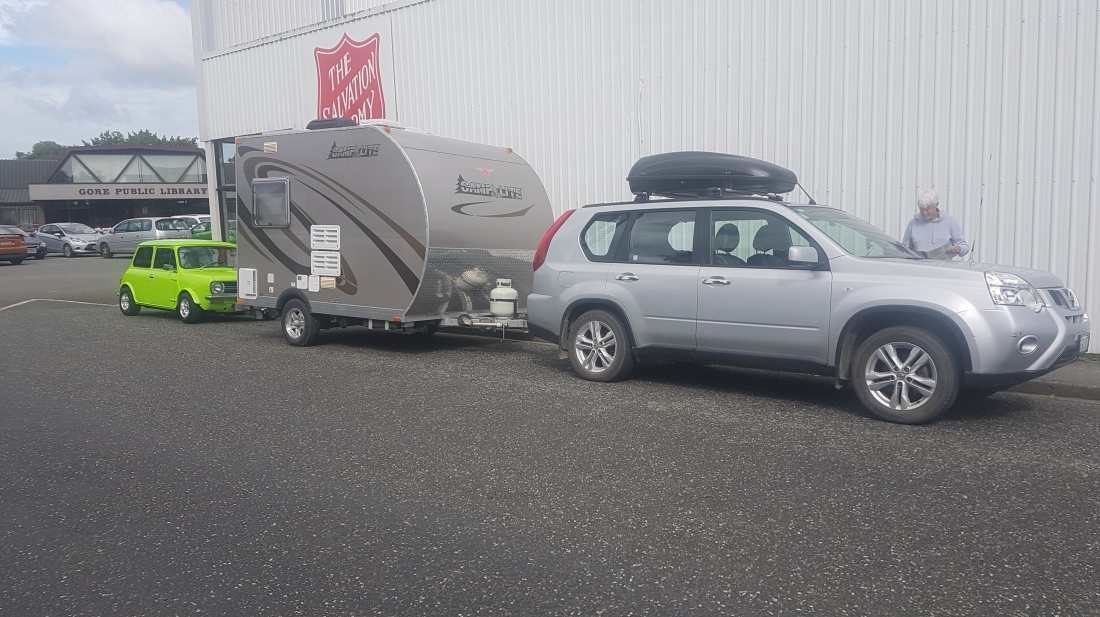 While waiting for Judy This little mini parked behind us. I thought it needed a picture taken of it.

Judy has just read this post and pointed out to me that she is standing there behind the car waiting for me!

2 thoughts on “Lawrence and Gore”